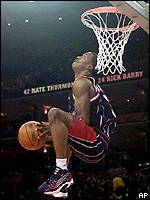 What if firefighters resorted to putting out fires by throwing tons of gasoline on a blazing building. If nothing else, it’d make one hell of a show. That is the Isaiah Thomas philosophy of mending what’s broken.

I’m sure Larry Brown – already having dealt with Iverson – is about as excited as having Francis as Jeff Van Gundy with Stromile Swift. Brown, who preaches defense, ball distribution and team play must be thrilled about having two PG’s inclined to think the 21ft fadeaway is a high percentage shot. 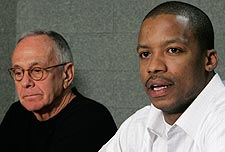 Adding Steve Francis to a roster plagued by Stephon Marbury not only guarantees Eddy Curry will be seeing the ball as much as the weight room but but also suggests that Isaiah Thomas just might be a better coach than a GM. It’s hard for anyone to imagine why Thomas would even think of making a move that would baloon his salary cap while confining the Knicks to a straight jacket in terms of flexibility. The trade might even be justified if he had gotten rid of Marbury and pulled a straight-up cancer-for-cancer trade. It might even be justified if he had made the move in an honest effort to climb out of the Eastern conference cellar but alas, not even that. It was made out of pure frustration and only for the sake of making a move.

On a side note, Stevie “Franchise” might be the most unapplicable nickname in the NBA. Unless of course, the guy who coined it meant for Francis to play for every franchise in the league. Seriously, how long do you think Francis will remain a Knick? Most likely till Thomas gets fired.

Bill Simmons’ take on the Marbury and Francis is not only accurate but damn funny:

Just like Stephon Marbury, Steve Francis seems like one of those guys who changes teams, gets his act together for a few months and eventually wears out his welcome. So what would happen if the Knicks and Magic traded Marbury for Francis … and then, three months later, they swapped them again? And this just kept happening every three months? In other words, you would be getting only the “getting his act together” part of the Marbury/Francis package without dealing with the “wearing out his welcome” side effects. I really think this could work.

With this trade, the Knicks have three Black Holes on their team. What’s a Black Hole? It’s a player who when you once pass the ball, do not see it until your next possession if and only if the Black Hole did not receive the inbound pass once his man scored.

The tendency of Black Holes is to create other Black Holes. Teammates often fear passing the ball to the Black Hole since they won’t be seeing it for quite some time and resort to taking shots that on any given night might be considered “forced” or even “unnecessary”. Once a player becomes resigned to play with a Black Hole, he gradually but surely himself transforms into one.