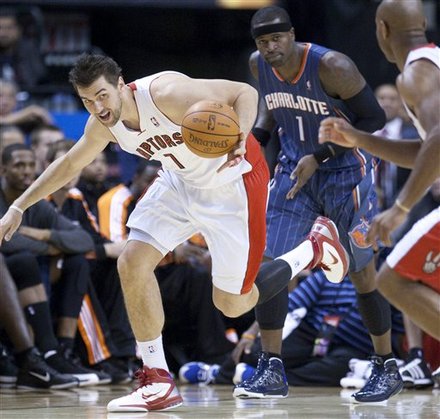 I’m not sure wtf happened on Saturday, but that was one of the best games I’ve seen in a long time (had to fire it up on NBA League Pass Broad Band). Never-mind that the Raptors allowed the Pistons to go up by 25 points or so somehow; but the trust, chemistry and teamwork needed to come back 25 in the last 5 minutes of the game was out outstanding, and makes me excited for tonights game against the Bobcats.

The Bobcats are coming off two brutal losses in a row; the last one so bad that an RR commentator put it this way:

It was so bad, that if Boston never scored any points in the 4th quarter they would have still won.

After getting ripped by Michael Jordan (a 47 year old who could still probably kick most of their asses at the game) for their lackluster play, you can expect a different bunch of guys to be waiting for the Raptors in North Carolina.

The last time these guys played, the Raptors took a 5 point lead into the 4th and fell apart. The game came down to the wire, when some sketchy play calling ended with Bargnani at the top of the arc getting stripped by Jackson.

Point Guards
What a bargain Baylesss has turned out to be. It’s not that he’s set the world on fire, it’s that he is starting to get some burn, and is showing Indiana, Portland and New Orleans that they gave up on him too quickly. Saturday against the Pistons, our boy put up 31pts 5rebs 7ast on 12 shots (12 attempts from the charity stripe to boot). That my friends is called being efficient. Without Calderon, it’s going to be difficult to take full advantage of this match-up, but the different look that Barbosa will bring in relief will be huge to winning this match-up. Augustin isn’t the best of shooters, but he still takes about 4 treys a game (40% shooter), last game against the Raptors he went 3-5 from beyond the arc, and did his part to open up the court a bit for Wallace to go all kamikaze. Since he laid a big fat donut against the Celtics on Saturday, you can expect him to come out guns blazing. Without Calderon in the mix, the point guard situation is a little worrisome for me since Bayless is still learning his craft. It’s going to be hit or misss tonight with Bayless.
Edge: Charlotte

Shooting Guard
I hate playing the Bobcats for two reasons, one being Jackson. The guy is 32, but shows no signs of slowing down (unlike me….fml). This is an ideal match-up for DeRozan to get up and down the court and use the athleticism to his advantage; the question is whether or not he’s going too. Since I ripped DeRozan, the kid has turned in a couple pretty solid performances, highlighted with 16pt 4reb performance in the win on Saturday. He still needs to get to the line, averaging under four (didn’t even attempt one against the Nuggets) over the last 5 games. DeRozan turned in a brutalr performance the last time they played, so he should be extra motivated to get at it this time around. I’m concerned about the wing battle tonight, since the Raptors don’t match-up well at all at the 2/3. It will take a solid showing by committee to get the job done.
Edge: Charlotte

Small Forward
19pts 14rebs 5ast 4blks; if you guessed Gerald Wallace’s production against the Raptors the last time out, you are correct. He almost single handedly out-blocked the entire Raptor team. I don’t expect anything different tonight; my only hope is he keeps the jawing on his mouth guard to a minimum. I’m trying to temper myself here a bit, but the small forward position is the most suspect on the Raptors. Between Weems, Kleiza and Stojakovic (if/when he gets back), you’d figure this lot has the tools to be an effective trio. Sadly it hasn’t worked out as such. Both Sonny and Kleiza have shown sparks of something, but neither has been able to maintain any level of consistency in effort/production/predictability.

Power Forward
If the Raptors are to have a shot at winning tonight, it will come at the 4/5. Last time around, it was Toronto’s offensive rebounding (recurring theme) that kept them in the game to the tune of 14 leading to 12 more possession. Amir was a beast off the bench, putting up 16pts 9rebs in 28 minutes of fairly foul-free play. The Raptors will miss Reggie Evans’ rebounding and interior play, but Ed Davis has been picking up some steam, and should be good to battle with Thomas off the bench.

My real concern is with Amir and Boris Diaw though. Boris is a crafty player who has a lot of moves and a high basketball IQ. If there was a text book player to get Amir into trouble, it would be him. Diaw is a crafty guy, who seems to have a hard time getting to the line, it’s actually interesting. Amir’s been doing a good job of not leaving the ground and trying to swat everything. I actually really appreciate it as he’s showing some marked improvement since the start of the season in this regard.
Edge: Toronto

Center
I’m predicting a long night for Bobcats front court. Still don’t understand why Jordan would trade Chandler for Dampier, then wave Dampier, and still expect to make the playoffs without a big guy who LIKES to play defense and rebound. 30/10 for Bargnani tonight, book it.
Edge: Toronto

Pace
Bayless likes to run; DeRozan/Weems/Barbosa like to run. Amir and Bargnani run the break as well as big man in the league…you can see where I’m going right? The Bobcats are the 7th slowest team in terms of pace in the league. If this gets into a defensive match, the Bobcats will have the upper hand, but if the Raptors can get Charlotte to trip over their own feet running backwards on defense, things can happen.

Production on the Wings
DeMar, Weems and Kleiza will all need to turn in a solid performance tonight. Both Jackson and Wallace play heavy minutes, so it’s not like there will be much of an opportunity to catch a second wind when the replacements get into the game. Weems and Kleiza need to be active participants tonight; the solid game against the Nuggets aside, they are averaging a paltry 8.3pts and 7.2pts in the month of December.

Rebounding
While the Bobcats have improved from second worst to 16 in the association in rebounding, they still have a ways to go. The Raptors have been able to weather the storm on the boards left by Evans’ injury with a full-team commitment to crashing the glass, but with the Bobcats solid rebounding on the wings, they can be dangerous. Bargnani will need to carry a bit more of the burden than he normally does, and Weems/Kleiza will have to work a bit harder at keeping a body between Wallace and the glass. It’s definitely doable…

The gamblers have the Bobcats as 5 point favourites with an over/under of 202;I’m going against the grain, and picking Toronto to take this one by 4.