First of all, that new thing NBA websites are doing with a player popping up out of nowhere and telling you to “check out the Hawks” is as lame as it can get, especially when the guy’s clearly reading it off a cue card. As of right now, Charlie V has the honour of telling us how exciting it will be when two cellar dwellers meet to decide the seating order in the lottery. The funny part is that he’s making absolutely zero effort to not look at the cue cards.

I guess you can’t really go wrong here. Even if Colangelo turns out to be the worst GM in the league and drives the Raptors to extinction, at least Richard Peddie can honestly say he hired the best guy at the time. This move is in stark contast to the Rob Babcock hiring when the primary response from media and fans was “Who?”.

I don’t dare to say anything negative about the hire considering the paramount optimism and applause it has received from all corners. Colangelo’s track record is so good that even Babcock condoned, “Well, that’s who they should’ve had to begin with”.

If there is one man who should be nervous, it’s Mitchell. It’s highly unlikely that Colangelo will stand for a rustic offense and a sieve-like defense especially when the coach is a PR liability. Every GM wants his man on the sidelines and I’d bet my left arm Mitchell is not who Colangelo sees as leading this team back to the promised land (note: promised land when talking about the Raptors means a winning record)

Anybody want to guess what NBDL team Hoffa will be playing for this time next year? No? Not even NBDL? You don’t mean to say he’s going to Europe? What, no way! HE IS NOT GOING BACK TO BYU! 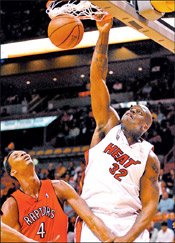 The great daily free publication, The Metro, screwed up the Miami/Toronto score by assigning the Raptors only 84 of their hard earned 94 points, thus making it a 17 point blowout rather than a close 7 point encounter. Not that it matters in the long run of things but I hate to keep seeing the Raps get short-changed by the media. They did manage to get the online version right. Any warm blooded human being is probably wondering why I even come within 50 yards of The Metro? It’s because I take the GO Train.

Am I the only guy who likes reading his column? Finally, Toronto gets some props from Vecsey:

Like most of us have done when we were in the same position, Colangelo caved when presented with roughly a $2 million pay raise from a franchise with the 25th-best record (20-35 entering last night) and arguably the fourth-best city in North America (New York, San Francisco, Chicago, Toronto) and bolted, oh, so regretfully. source