The “best game of the year” edition

Banks – somebody call a toe truck.

Bargnani – pretty much a non-factor in the second half due to foul trouble (and eventually fouling out in the early fourth), he played a hell of a game on Dwight and had him stumbling around as much as I’ve seen Howard do that all year. He had a hot shooting hand, one we could have used in the dying minutes, but his efforts on Dwight may have won us this game.

Bosh – he is the basketball version of a snake in a box full of mice. Stone. Cold. Killer. Took way too many jumpers, but when he attacked he wasn’t getting the calls anyway. I was surprised to see him staying away from being the double on Dwight, but it kept him in the game. That jumper over Dwight late in the fourth may be in the top 5 shots of this (dismal) Raptors season.

Calderon – ridiculously on fiah shooting the ball, but not a great job getting the ball to his teammates in great spots. In a game full of offsets, I guess we need to take this one, but not a smart passing game in the slightest.

Douby – you know when you are packing for a weekend trip and you throw in that extra pair of underwear “just in case”. Those are known as the doubies.

Graham – he was playing harder than RapsFan in the shower at an all girls catholic school. Some of the balls he went after were beyond the realm of all-things-Joey a year ago. Kudos on a workman like effort.

Jawai – just happy he is back in the big show so he can order “Slutdog Jizzanaire” and not have to pay for it upon checkout. 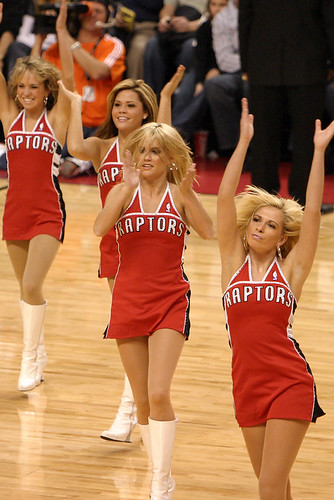 Kapono – back to being underused in our offensive sets, even so much that Triano had him pass up a nice shot to feed VOSKUHL IN THE CORNER FOR A 3. Triano actually called that play! Incredible. Anyway, get Kapono the ball in a situation he can make things happen. This guy shouldn’t be looking to Bosh to set a screen for him.

Marion – welcome back. If he is using these final few games as an audition like he did tonight, I’ll take it. That was some killer game out there tonight, taking it to the Magic like an elephant at a peanut warehouse. The only thing better than Bosh’s shot over Howard was Marion’s postgame interview with Jack. Classic interview, classic game.

Mensah-Bonsu – listen…hear that? Kind of silent? That’s the sound of his agents phone at the end of the season.

O’Bryant – hot tip: the Irish are good at rugby. Look into it, Patrick.

Parker – his defensive effort was a catalyst tonight. Active feet and hands, jumping into passing lanes, directing teammates. He put on a clinic on how to beat his man to any spot on the floor and how to get into a guys head.

Ukic – why aren’t we contending? Our back up PG has a night like this in one of our best overall games of the year: 9min, 0 pts, 1 assist, 1 turnover, 3 fouls. Pathetic.

Voskuhl – came in and did what he had to do: put Dwight on the line. For once, his fouls were needed. Thank God we have a specialist in that category on our bench. Wonder if there is a 9th man of the year award?

Under The Bus:    Roko Ukic