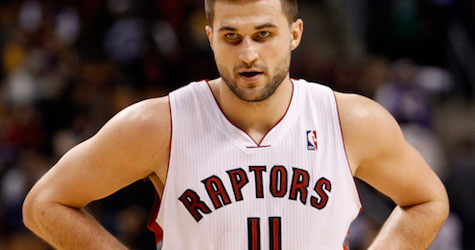 I want to defend Linas Kleiza. I want to convince myself that the advancements in micro-fracture surgery in the past twenty years vastly improve the chances he’ll avoid becoming another Penny Hardaway and make a full recovery. Once he’s back in playing shape, he’ll leapfrog the Raptors paper-thin small forward depth chart, pushing Rasual Butler deep into the bench where he belongs. With knee woes finally behind him, Kleiza will find his shooting touch that made him a reliable offensive threat for the Nuggets. Casey will transform Klieza’s defensive game, highlighting his strengths (strength, toughness) while minimizing his weaknesses (lateral quickness, speed). Talk of how his bloated contract needs to be amnestied will hushed as he plays his way to becoming a solid contributor to the Raptors building process.

Unfortunately, for all involved, this won’t happen. Pre-injury, during the 2010-11 season, Kleiza’s performance was already slipping. Despite being given the opportunity to start over half the games he played in, he saw a significant dip in his three point percentage, and a rise in his turnover rate. Coupled with his suffering offensive output, the thirty-nine games he played that season made it apparent that he was a man without a position on the defensive end. He lacked the mobility to stay with athletic threes and was overpowered by physical fours. Without the motor or hustle to compensate for his defensive physical shortcomings, he was a major liability on the floor. His rebounding numbers have never been noteworthy throughout his NBA career, and it’s farfetched to think they would improve after a major injury.

The addition of Casey’s dedication to defence and rebounding makes Klieza’s return to the starting line-up, or even rotation, more unlikely. Having two of your three frontcourt players lacking plus defensive and rebounding capabilities is counter-intuitive to the system Casey is trying to instil. A player in possession of a skill set that is a questionable match for our current Raptors squad, with a cap hit of roughly five million dollars, coming off a surgery that has effectively ended or hampered the careers of dozens of NBA players, simply does not make sense for the Toronto Raptors. The argument had by Raptors fans pre-season was deciding who should be amnestied; Jose Calderon or Linas Kleiza. Despite being older, providing twice the cap hit, and suffering from a slew of injuries the past couple seasons, Jose is playing his way out of that discussion.

Sometime in the near future, Linas Kleiza will return to being an active player for the Raptors. He will play. You will be disappointed. With depth always being important, especially in a lockout shortened season, he’ll stick around on the bench for the year, sometimes wearing a uniform, sometimes sporting a suit. He’ll be amnestied in the offseason, and we can then turn our attention to the unbridled fear that will consume Raptor fans once Colangelo hits the free agent market with cap space. The Raptors will draft a small forward, or perhaps throw some money at Wilson Chandler or Nicolas Batum. Kleiza will go to another team and hopefully turn into a solid eighth man, which is probably what he was all along. I want to defend Linas Kleiza; I just don’t see the point.