Welcome to part two of this year’s draft series. For part one, please check here.

This part will only highlight one prospect. I’ll be releasing one more draft piece right before the draft highlighting some of “the other guys”, so please keep an eye out for that. 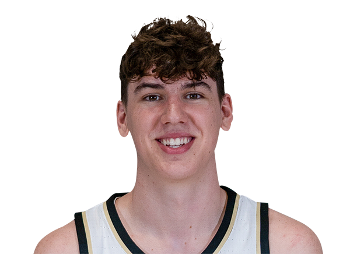 Jake LaRavia is, put simply, my guy in this class. I have him ranked as a lottery pick, and he would be my first choice at 33 if he’s still available. He measured well at the combine and for some reason turned out to be younger than most people thought, so that has potentially rocketed his stock. That said, the Raptors would be a team in his range and I just had to write about what an amazing pickup he would be.

Friendly reminder junior Jake LaRavia is going to be 20 on draft night.

Was super productive for Wake Forest too, what’s the base rate draft grade of a player with his age / production profile?

I recently joined Mac, Samson, and Curly on the Running off the Screen podcast where I spoke at length about Jake, and you can check that out here. Be sure to check out the whole podcast though! It’s great.

As much fun as I had talking about the draft with those guys, this focus on LaRavia will be somewhat easier to digest for those with shorter attention spans.

A source tells me that the Raptors actually like LaRavia quite a lot. Just one look at his tape would explain why: a two-way, versatile point forward with high basketball IQ is no doubt on the list for a lot of NBA teams. I think that Jake’s approach to the game would be a welcome addition to a Raptors locker room in need of some reliable depth who have the potential to grow, and clearly the team agrees.

The Raptors have a lot of weaknesses to address, let’s be real. While it would benefit them to maybe acquire a few more picks and use them to fix their rather poor depth chart, using just one pick on LaRavia would be an excellent start.

For starters, LaRavia grew up as a point guard before hitting a growth spurt. He has lots of experience with playmaking, and had almost 100 assists in the half court this past season at Wake Forest.

He averaged a touch under 4 assists per game, and even has experience running pick and roll. While the Raptors don’t run a lot of pick and roll, Jake’s versatility when it comes to his playmaking would nonetheless be invaluable for a team in desperate need of that kind of playmaking experience and reliability off the bench. As it stands, I don’t think there are currently any players on the roster who would be considered fairly reliable with setting up others outside of the usual suspects in the starting five.

There’s very clearly a lot of upside to LaRavia as a shooter. His form is very smooth with a high release when he’s able to set himself up. He averaged 38% on 2 attempts per game from deep and averaged 77% from the line. The three point attempts is admittedly low volume, but the form is good enough where I don’t have much concern.

Coming off of screens and moving off ball is also where Jake will be able to make his money, as he’s able to relocate and get open as well as any prospect I’ve seen.

Jake shot nearly 56% inside the arc, and a lot of that is due to his ability to get to the rim.

Simply knowing where to be and sneak backdoor for the cut will make his teammates’ lives so much easier at the next level.

He also knows where to find his teammates when they cut as well, it was his bread and butter play with Wake Forest’s Alondes Williams.

Despite not being much of a self creator, Jake’s combination of size, cutting ability, and rim finishing makes him a pretty solid bet to get you easy buckets inside. He’s also known to utilize a nice post moves on mismatches.

I love Jake’s awareness when he’s in the post. His pump-fake inside has been known to cause a few players to leave their shoes.

Defensively, Jake is very good. Advanced stats love him and paint him as a positive defender in pretty much every regard. He’s capable of defending either forward position and small ball bigs, and he’s one of the best team defenders that you’ll find in this entire draft class.

He’s such an intelligent defender in general, and he’s capable of locking up arguably the most talented player in this draft in Paolo Banchero.

I’m not going to ignore his stocks either. Jake averaged 1 block and 1.7 steals per game in his junior year.

LaRavia’s fit with the Raptors is pretty simple — he would be ready for big league minutes immediately, and would slot in seamlessly at either forward position. His ability to effectively cut to the rim and space the floor as well as provide some playmaking at his position would address several offensive needs for the Raptors, and his defensive prowess would allow him to stay on the floor against most frontcourt players. His switchability and defensive IQ would make Nick Nurse salivate.

Long term, I have faith in Jake becoming a very good player who can give you starter minutes. At this point in the draft, you take a prospect who has that kind of projection and run with him. Going over everything that we have so far, and the fact that he’s only 20 years old, I don’t see why he wouldn’t be able to grow into such a role with great levels of success. I can think of very few examples of players who can shoot, defend, playmake, and cut to the rim like Jake who haven’t had success in the NBA.

I feel as though players like LaRavia who are not as athletic but seen as a “jack-of-all-trades” get unfairly mischaracterized as being high-floor/low-ceiling prospects. Those who keep up with the draft will remember similarly incorrect discourse with Franz Wagner last season. While I don’t know if LaRavia can mimic Franz’s rookie production, I do think it’s rather silly to place a similar low ceiling outcome on him like what was done to Franz and so many other well-rounded prospects before him. That said, it may be a reason as to why his stock is considered late first to early second round.

Currently LaRavia’s game is more suited to catch and shoot jumpers as well as finishing plays at the rim. Despite Jake being a positive defender in practically every respect, due to his lack of agility I would expect faster guards and wings to blow by him pretty frequently if he finds himself in a mismatch. It’s difficult to see his self-creation improving very much due to his poor pull-up ability (admittedly on a low sample of 29% on only 17 attempts) and lack of burst. The low volume from outside the arc does raise some concerns. He had fairly low usage at Wake Forest, so he’s comfortable in a complimentary role, but can he be more? Front offices get swept up in wanting to make upside picks very often, and there may be some sexier names available at the end of the first round which causes Jake to fall.

If I may rant for a moment, I’m going to talk about Jake when compared to some other prospects in this range. A common criticism of Jake is his athleticism. Yes, he may not be the bounciest or fastest prospect available (though he did place third overall in lane agility, which is interesting). His wingspan is only +1.5 inches while there are guys in this range who could be more appealing since they could theoretically hunt geese with a rake.

While having players who jump out of the gym is nice, I feel like it’s incredibly common for people to get hung up on perceived potential with raw yet physically imposing players. Sure, sometimes it works out… but when looking at how far ahead Jake is on the developmental curve compared to these guys skill-wise, I find it difficult to argue for many prospects in this particular class above Jake at this range of the draft. So many people want to find the next one-in-a-million shot that is the next Giannis Antetokounmpo, that sometimes these guys who are less flashy and just simply good at basketball slip through the cracks.

Is it likely that LaRavia is a first round prospect who gets picked early and I’ve wasted my time hyping him up to Raptors fans? Absolutely.

Is it also a possibility that draft night is going to be completely unpredictable and Jake falls maybe 5 spots later than expected right into the Raptors’ laps? Also yes.

That said, unless an absolutely crazy name drops to 33, Jake LaRavia is going to remain #1 on my board for the Raptors’ realistic options. I can’t imagine why the front office would pass over a player like Jake who — with his Swiss Army Knife set of skills — would address several of the team’s weaknesses on his own and has the potential to be greater.

Part 3 in this year's draft cycle. I'll be going over a wide range of prospects that the Raptors could select at pick 33.

Samson Folk brings on Tre, Nabeel, and Goose to talk about who they like for the Raptors in the draft.

Samson Folk talks to professional scout, Francis Adu about a huge collection of players that the Raptors might draft.