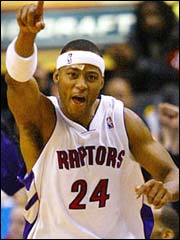 It’s hard to believe that Morris Peterson has already been in the league for six seasons. That’s six long seasons of NBA service marked by varying degrees of promise and glimpses of being better than average. As a rookie the best thing about him used to be that he could move without the ball and exploit sleepy eyed defenders by back-cutting and finding space on the floor for open (and unforced) jump shots. A promising young player which was beckoned as the second fiddle behind Carter. That was Year 1.

Since then here’s the pattern of Mo Pete’s season:

The good news is that he’s become a deadly shooter when he catches the ball in rhythm. However, one fears for his life when he’s asked to create on his own, something he could never do, but was expected to learn over his first few years. There were hopes once upon a time that he would blossom into a player that perhaps would make others better. No such luck.

The best to expect from Mo Pete this year is more of the same.