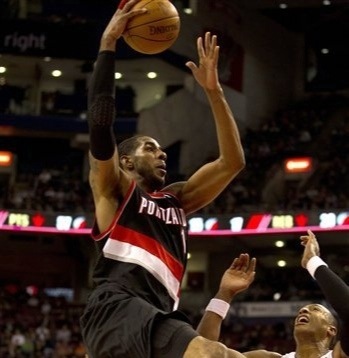 Coming off a 23 shellacking at the hands of the Celtics, Portland had me scared. A franchise seemingly plagued by bad luck, the Blazers had shrugged off the ongoing Greg Oden fiasco and the loss of Brandon Roy to retirement as if they were minor inconveniences and were playing inspired basketball. In spite of my doubts, however, those wizards over at TSN2 pulled me right back in with a hope filled opening clip to the broadcast, and I found myself believing that things would be different tonight. The Raptors got off to a quick four point lead with James Johnson looking like a man possessed, before the Blazers woke up and put the Raptors in their place. What followed was one of the most uninspired 24 minutes of basketball I have ever seen the Toronto Raptors play.

Lacking a player who can create his own shot off the dribble, or even a go-to offensive weapon, Portland was all too happy to allow the Raptors to take contested jump shots for the rest of the quarter and for the majority of their first quarter possessions, and Toronto obliged (Derozan in particular). While the Raptors were busy throwing up contested bricks, the Blazers set the tone for the rest of the game by running an efficient half-court offense. Amir looked overmatched by Aldridge’s physical prowess and overall superior talent, and the Raptors defensive schemes were unable to make up for it. The easy scapegoat for the game would be Amir, since he played one of his worst games in recent memory, but it is clear he is injured and in need of some rest. The only bright spot for the Raptors in the 1st was their 10 fast break points, which would be quite promising if they had been able to muster more than 4 points from their half-court offense. The quarter ended with a potentially injured Aldridge and the Raps down by 13; a scary number considering the Blazers played fairly mediocre basketball.

The second quarter gave the Raptors the opportunity to sink to even lower depths. After quickly recovering from his strained lower back, Aldridge returned and continued to dominate the Raptors by either converting easy buckets or distributing the ball to wide open teammates when the Raptors collapsed on him. With the lead bloated to 21 points, a chorus of boos rain down from the fans after yet another ugly jump shot (part of a 1-10 stretch) by king Rasual. Perhaps motivated by embarrassment, the Raptors managed to cut the lead to 15 by the end of the second.

If you were lucky enough not to see the game, you might be led to believe that this wasn’t a disgusting first half display by the Raptors, but I can assure you, the numbers lie.
After what was almost certainly an expletive filled halftime speech by Coach Casey, the Raptors had a little life in them and made a game of it. The Raptors squad that came out bore no resemblance to the one that put up such a meager effort in the first half. They utilized their zone defense to momentarily stagnate the Blazers offense, and DeMar seemed to remember that he’s supposed to be second best player in the organization and went back to his strengths. Finally abandoning contested jump shots, the Raptors actually attempted to go inside and get easy buckets. They cut the lead to single digits and were within a few solid possessions of competing for a victory before this magical stretch of effort and efficient play, that lasted about eight minutes, came to an end. The Blazers broke down the zone and the Raptors returned to lazily taking jump shots. Even after scoring 14 points in the quarter with strong moves to the bucket, DeMar drifted back into the bad habits he’s picked up this season that have made him an ineffective player.

The fourth quarter went like clockwork. The Blazers were never legitimately threatened by the Raptors, maintaining a comfortable double digit cushion, and the Raptors allowed them to coast to an easy victory without putting up a fuss. Aldridge finished with 33 and 23, a monster line that he made look easy. A ten point loss to a good Western Conference team is probably won’t raise eyebrows anytime soon, but I think it should. As with all Raptor fans, I’ve gotten accustomed to the lackluster efforts, but I don’t think it’s too much to ask for a better performance than the one they gave tonight, especially coming off the Celtics game and especially at home.

This game was painful enough to watch on T.V., I can’t even imagine what kind of torture it must have been to be in the building and actually pay to watch that kind of a performance. We all know that the Raptors have a deficiency in talent against almost any opponent they come up against (especially with Andrea out of the lineup), but that kind of excuse wore out long ago.
I’ve always been a big DeMar Derozan and Ed Davis fan, but seeing them (along with the entire Raptors squad) get completely outhustled and outclassed by James Johnson, a guy who couldn’t even crack the rotation in Chicago makes you wonder what kind of value these players really have. That isn’t a slight on Johnson either; he is simply a player who is exceeding expectations when given the opportunity, while the young cornerstones of our franchise have wilted this season when given the spotlight. There are real questions about the direction of this franchise, and a good draft pick and a young stud in Europe aren’t cure-alls. I don’t want to be all doom and gloom, but these past two games have left me with a really bad taste in my mouth.
Rebuilding or not, if things remain this bleak, something has to change.